Ember JS is a Javascript framework for ambitious Web Applications. This means that you can build great applications, with tons of user interactions in a very efficient way. In this post I’ll tell how to create a simple EmberJS Web Application.

Ember uses NodeJs and its npm (node package manager) to manage some of dependencies, including Ember itself.

It also depends on bower to be installed. So make sure you have all of them installed initially:

Then install the last release version of Ember, in this case 2.7:

For creating an Ember project with the name quickstart:

This will create the project, access the project folder and then start Ember server. You can see your app at http://localhost:4200/.

The main goal when building an Ember app is to understand the user interface you want to build. In a uri perspective, all folder structure represents a nested resource. Ember uses that to organize Routes and Templates. Here it is a simple description of Ember Classes:

The Router receives a hit from the user and dispatches to a specific Route. There is just one Router per application and is stored in app/router.js.

In a specific Route you can fetch data from the server based on uri and query params and then it’s controller is called.

A Controller can do the same as the Route and it’s being discontinued by the Ember community, so please don’t use Controllers. You can just ignore them when creating a new app, but if you are working in a legacy Ember app you need to know that Controllers in Ember are Singletons. So it will keep a state in it. This could cause some weird behavior or bugs.

Finally a Template related to its Route is called and rendered using handlebars for basic conditionals, loops and variable outputs.

As I said Routes and Templates are related to the uri, but sometimes there are some logic and templates that could be reused. To do that you might need to use a Component. A Component can have both a component class to fetch some data from the server and also it’s template. Components are not stick to the uri. 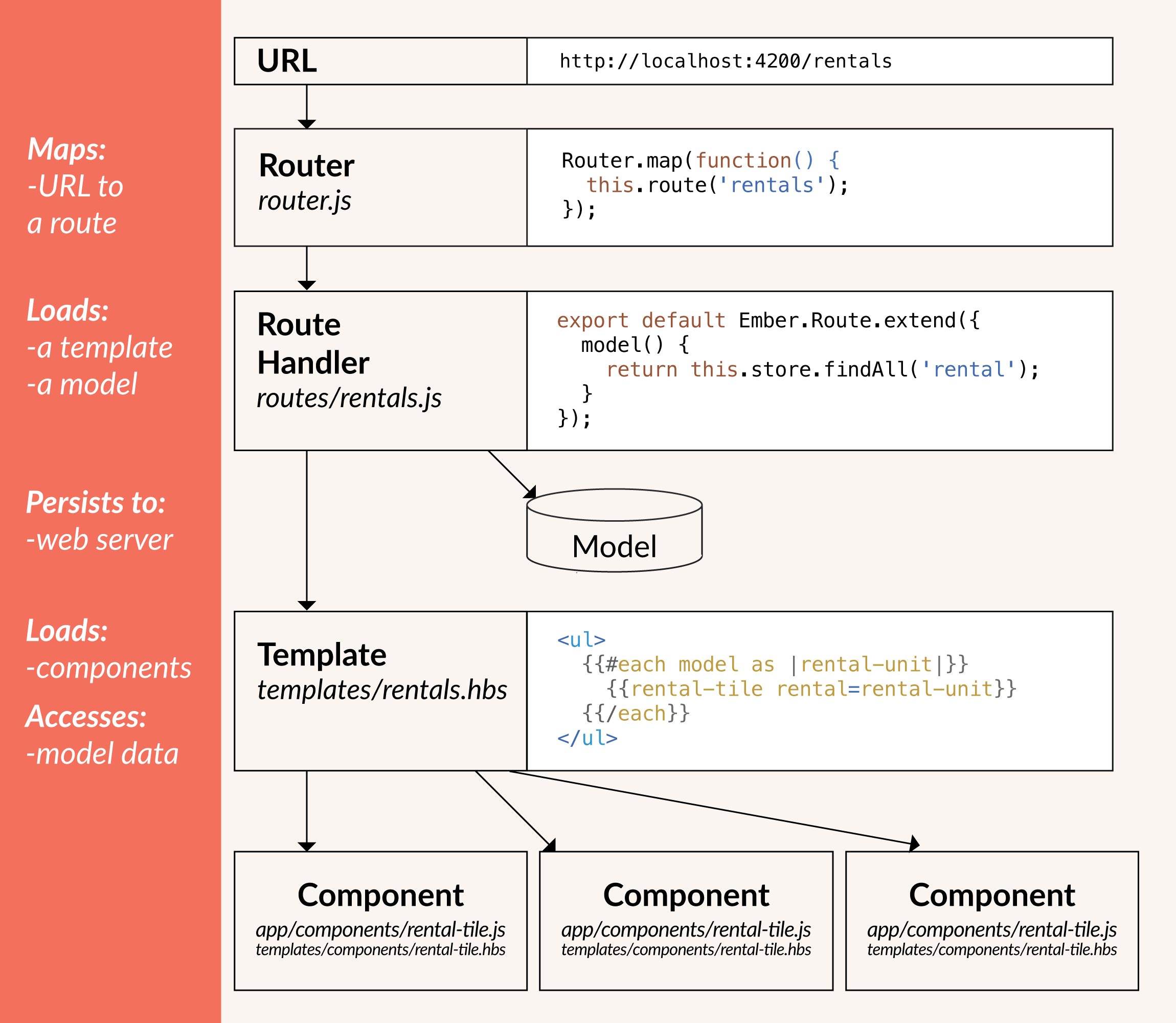 The easiest and fastest way to create your code in Ember is to use ember-cli generators. Run the following to know all generators available:

Add a model that just return a string:

Finally show it in the template:

Go to http://localhost:4200/hello and check you first Ember Route and Template.

Let’s create an Acceptance Test in order to test the app in the User’s perspective:

This is a simple and straightforward test that verifies the current url and the content produced when the user hits /hello page:

It’s time to check if your tests are passing at http://localhost:4200/tests

Ember is a powerful Javascript framework and yet very simple to start and maintain. A good way to start is to get used with the core concepts of Ember. Also use Ember generators and other ember-cli tools to gain speed on development and use tests as the best friend you can have when coding. You’ll find yourself as an Ember developer in a blink. Good luck!

Ember is a light, flexible, efficient and very powerful javascript framework for very Ambitious web applications. In this post I write about the greatness of Ember, why I like it, some myths and also its problems. This is an opinionated post.

My goal is to encapsulate a API with service classes using a DSL similar to ActiveRecord. This way we can use methods like where, find_by, etc. In order to achieve that I created a class to abstract a json API using the gem faraday and the result is very cool.